Summary of every phase in Incident response life cycle

This phase will be the work horse of your incident response planning, and in the end, the most crucial phase to protect your business. Part of this phase includes:

This is the process where you determine whether you’ve been breached. A breach, or incident, could originate from many different areas.

When a breach is first discovered, your initial instinct may be to securely delete everything so you can just get rid of it. However, that will likely hurt you in the long run since you’ll be destroying valuable evidence that you need to determine where the breach started and devise a plan to prevent it from happening again.

Instead, contain the breach so it doesn’t spread and cause further damage to your business. If you can, disconnect affected devices from the Internet. Have short-term and long-term containment strategies ready. It’s also good to have a redundant system back-up to help restore business operations. That way, any compromised data isn’t lost forever.

This is also a good time to update and patch your systems, review your remote access protocols (requiring mandatory multi-factor authentication), change all user and administrative access credentials and harden all passwords.

Once you’ve contained the issue, you need to find and eliminate the root cause of the breach. This means all malware should be securely removed, systems should again be hardened and patched, and updates should be applied.

Whether you do this yourself, or hire a third party to do it, you need to be thorough. If any trace of malware or security issues remain in your systems, you may still be losing valuable data, and your liability could increase.

This is the process of restoring and returning affected systems and devices back into your business environment. During this time, it’s important to get your systems and business operations up and running again without the fear of another breach.

Once the investigation is complete, hold an after-action meeting with all Incident Response Team members and discuss what you’ve learned from the data breach. This is where you will analyze and document everything about the breach. Determine what worked well in your response plan, and where there were some holes. Lessons learned from both mock and real events will help strengthen your systems against the future attacks. 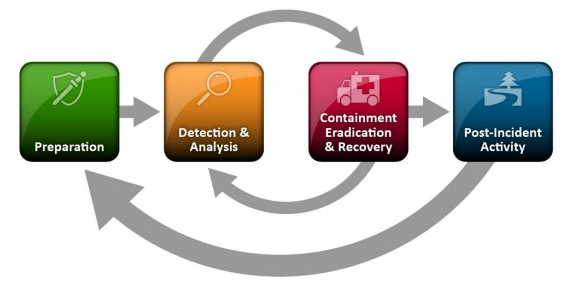 The following provides a brief overview of some of the main recommended practices for securing networks, systems, and applications

Incidents can occur in countless ways, so it is infeasible to develop step-by-step instructions for handling every incident. Organizations should be generally prepared to handle any incident but should focus on being prepared to handle incidents that use common attack vectors. Different types of incidents merit different response strategies.

Signs of an Incident

The most challenging part of the incident response process is accurately detecting and assessing possible incidents—determining whether an incident has occurred and, if so, the type, extent, and magnitude of the problem.

Signs of an incident fall into one of two categories: precursors and indicators

Sources of Precursors and Indicators

Precursors and indicators are identified using many different sources, with the most common being computer security software alerts, logs, publicly available information, and people

Incident detection and analysis would be easy if every precursor or indicator were guaranteed to be accurate; unfortunately, this is not the case.

Even if an indicator is accurate, it does not necessarily mean that an incident has occurred. Some indicators, such as a server crash or modification of critical files, could happen for several reasons other than a security incident, including human error

When the team believes that an incident has occurred, the team should rapidly perform an initial analysis to determine the incident’s scope, such as

Documenting system events, conversations, and observed changes in files can lead to a more efficient, more systematic, and less errorprone handling of the problem.

The recoverability from the incident determines the possible responses that the team may take when handling the incident. An incident with a high functional impact and low effort to recover from is an ideal candidate for immediate action from the team.

Organizations should also establish an escalation process for those instances when the team does not respond to an incident within the designated time.

When an incident is analyzed and prioritized, the incident response team needs to notify the appropriate individuals so that all who need to be involved will play their roles. The exact reporting requirements vary among organizations, but parties that are typically notified include:

During incident handling, the team may need to provide status updates to certain parties, even in some cases the entire organization. The team should plan and prepare several communication methods, including out-of-band methods (e.g., in person, paper), and select the methods that are appropriate for a particular incident. Possible communication methods include: 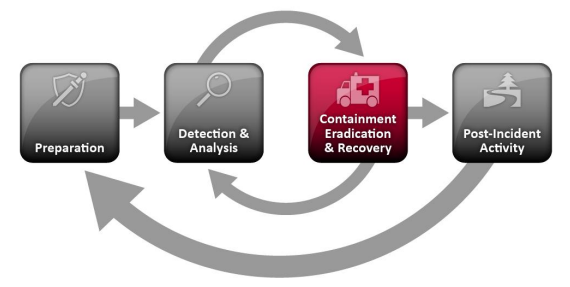 Containment is important before an incident overwhelms resources or increases damage. Most incidents require containment, so that is an important consideration early in the course of handling each incident.

Organizations should create separate containment strategies for each major incident type, with criteria documented clearly to facilitate decision-making. Criteria for determining the appropriate strategy include:

In certain cases, some organizations redirect the attacker to a sandbox (a form of containment) so that they can monitor the attacker’s activity, usually to gather additional evidence.

Although the primary reason for gathering evidence during an incident is to resolve the incident, it may also be needed for legal proceedings.

A detailed log should be kept for all evidence, including the following:

Collecting evidence from computing resources presents some challenges. It is generally desirable to acquire evidence from a system of interest as soon as one suspects that an incident may have occurred. Many incidents cause a dynamic chain of events to occur; an initial system snapshot may do more good in identifying the problem and its source than most other actions that can be taken at this stage

The following items describe the most commonly performed activities for attacking host identification:

After an incident has been contained, eradication may be necessary to:

Recovery may involve such actions as

Eradication and recovery should be done in a phased approach so that remediation steps are prioritized. For large-scale incidents, recovery may take months; the intent of the early phases should be to increase the overall security with relatively quick (days to weeks) high value changes to prevent future incidents.

Each incident response team should evolve to reflect new threats, improved technology, and lessons learned. Holding a “lessons learned” meeting with all involved parties after a major incident, and optionally periodically after lesser incidents as resources permit, can be extremely helpful in improving security measures and the incident handling process itself. Questions to be answered in the meeting include:

Benefits from having post-activity meetings

Possible metrics for incident-related data include:

Besides using these metrics to measure the team’s success, organizations may also find it useful to periodically audit their incident response programs. Audits will identify problems and deficiencies that can then be corrected. At a minimum, an incident response audit should evaluate the following items against applicable regulations, policies, and generally accepted practices:

Organizations should establish policy for how long evidence from an incident should be retained. Most organizations choose to retain all evidence for months or years after the incident ends. The following factors should be considered during the policy creation: