Low Orbit Ion Cannon (LOIC) is one the easiest DDoS tools available, DoS (Denial of service) attack is one of the more powerful hacks, capable of completely taking a server down. In this way, the server will not be able to handle the requests of valid users. With a DOS attack, many computer systems connected to the internet will try to flood a server with false requests, leading to a service disruption.

The tool is able to perform a simple dos attack by sending a large sequence of UDP, TCP or HTTP requests to the target server. A would-be hacker need only then select some easy options (address of target system and method of attack) and click a button to start the attack.

(TCP, UDP and HTTP). All three methods implement the same mechanism of attack.

Wireshark will show all the huge flood attack. 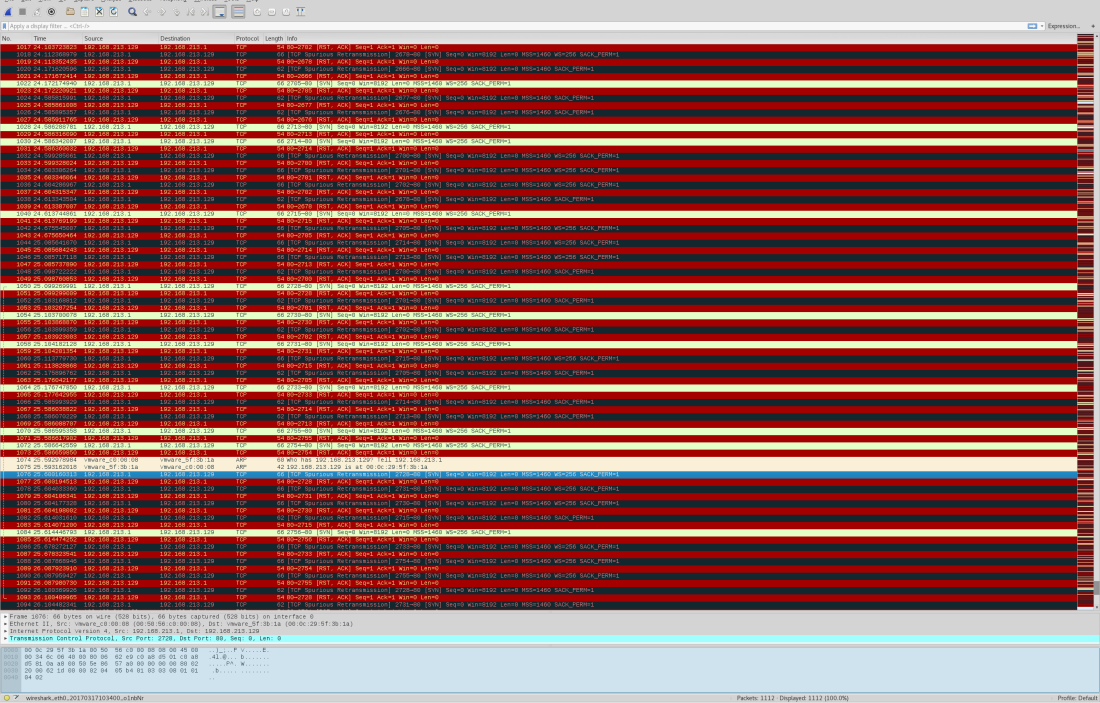 After starting the attack, you will see some numbers in the Attack status fields. When the requested number stops increasing, restart the LOIC or change the IP. You can also give the UDP attack a try. Users can also set the speed of the attack by the slider. It is set to faster as default but you can slow down it with the slider.

Here’s the meaning of each field:

Using a proxy:  You can't LOIC with a proxy, the requests will hit the proxy and not the target and it defeats the purpose.

Legal: DoSing(NOT DDoSing) is a legal grey area in most places but check local laws to be sure.

The main drawback of LOIC as a DOS attack tool is that it is very easy to find the attacker. This tool does not take any precautions to hide IP address of the origin of the attack. Attacks generated by this tool are simple and expose the IP address of attacker in each request packet sent to victim server to flood the request queue. If you are thinking that we can use proxies to solve this problem, you are wrong. Attackers cannot use proxies in these attacks because your requests will hit the proxy server, not the target server. So you will not be able to launch a DOS attack on the server effectively while using a proxy.

The windows version of LOIC has a feature called HIVEMIND. With this, users can connect their client to an IRC server. In this way, it can be controlled remotely, thus facilitating some risky attacks, so use this wisely. But connecting to an IRC server will not allow a remote administration of your machine or any other risks to your system: it will only control your LOIC client.

To start LOIC in HIVEMIND mode, run this command in the command prompt:

After running the above command, your LOIC client will connect to irc://irc.server.adress:6667/loic

You can also set more parameters in the command to use the tool in better way. Use port and channel too with the command.

It will connect to irc://irc.server.adress:1234/secret

HIDDEN MODE: You can also run your LOIC in hidden mode while using it in HIVEMIND. Running in hidden mode means LOIC will run without any visible GUI at your windows system. Just add /HIDDDEN in your command.

It will connect LOIC client to irc://irc.server.adress:6667/loic without any visible GUI on windows.

Web-based LOIC (JS LOIC): This version of LOIC was released on 9th December, 2010. This web- based tool runs only on JavaScript-enabled web browsers. In JS LOIC, JS stands for JavaScript This version of LOIC sends an ID and message with lots of connections with each ID and message. This is easier to use than the desktop version. Just visit the web page with a single HTML file and start the attack. The attack power of this version is same as from the desktop.

How to prevent the attack of LOIC

LOIC is available for free to download and use, and can be used effectively with very little hacking experience. Anyone that wants to can attack a website with this tool.

As discussed above, the attack of this tool is simple and easy to identify. A well-configured firewall is enough to prevent the attack from being fully effective.