However, some security vulnerabilities exist due to misconfigured DNS name servers that can lead to information disclosure about the domain. This forms an important step of the Information Gathering stage during a Penetration test or Vulnerability assessment.

Let’s say the user opens up the browser and types in infosecinstitute.com. It is now the responsibility of the DNS resolver in the user’s operating system to fetch the IP address. It first checks its local cache to see if it can find a record for the queried domain name. A cache usually contains a mapping of IP-addresses to hostnames which are saved during recent lookups so that the resolver does not have to fetch the IP address again and again. If it can’t find the IP address in its cache it queries the DNS server to see if it has a record for it. A DNS server is usually given to you by the ISP or you can manually set up a DNS server for yourself. If it still can’t find the IP Address then it goes through a process or recursive DNS query in which it queries different name servers to get the IP-address of the domain. As soon as it finds the IP-address it returns the IP-address back to the user and also caches it for its future use. 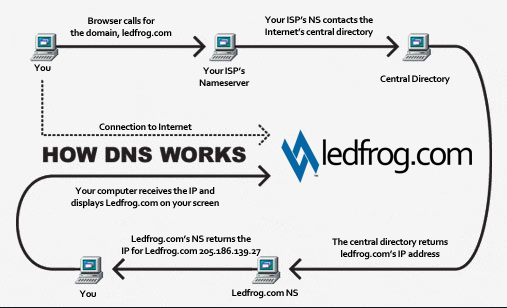 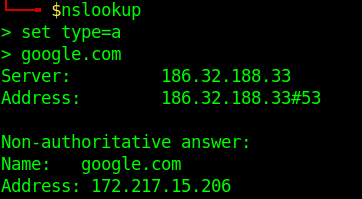 Network view of the request. 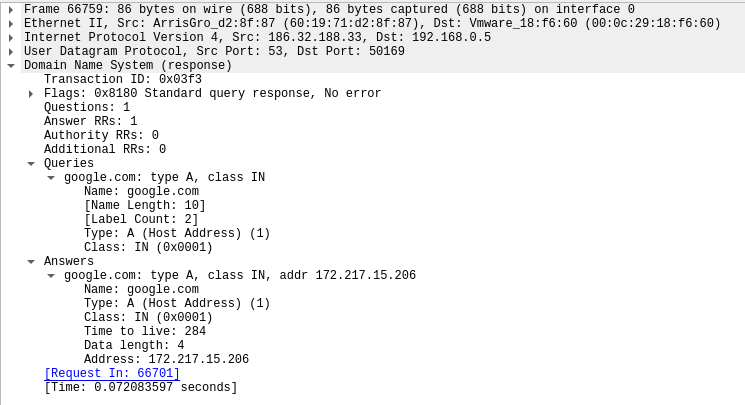 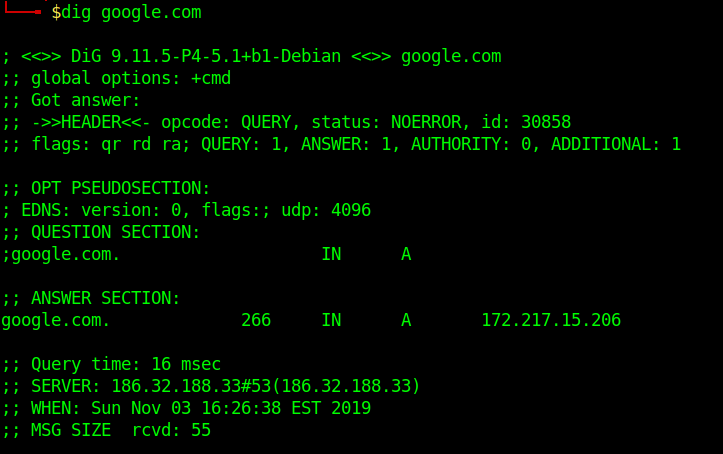 To simplify the output, we will be using those extra parameters on the following commands:

+answer – Tells dig to return the answer section (the “juicy” part of the output).

To specify the record we would like to query, we just have to add the record type right after the domain specification. Here is a basic syntax we will use:

DNS servers create a DNS record to provide important information about a domain or hostname, particularly its current IP address. The most common DNS record types are:

Address Mapping record (A Record)—also known as a DNS host record, stores a hostname and its corresponding IPv4 address.

Name Server records (NS Record)—specifies that a DNS Zone, such as “example.com” is delegated to a specific Authoritative Name Server, and provides the address of the name server.

Start of Authority (SOA Record)—this record appears at the beginning of a DNS zone file, and indicates the Authoritative Name Server for the current DNS zone, contact details for the domain administrator, domain serial number, and information on how frequently DNS information for this zone should be refreshed.

There are three types of queries in the DNS system:

In a recursive query, a DNS client provides a hostname, and the DNS Resolver “must” provide an answer—it responds with either a relevant resource record, or an error message if it can't be found. The resolver starts a recursive query process, starting from the DNS Root Server, until it finds the Authoritative Name Server (for more on Authoritative Name Servers see DNS Server Types below) that holds the IP address and other information for the requested hostname.

In an iterative query, a DNS client provides a hostname, and the DNS Resolver returns the best answer it can. If the DNS resolver has the relevant DNS records in its cache, it returns them. If not, it refers the DNS client to the Root Server, or another Authoritative Name Server which is nearest to the required DNS zone. The DNS client must then repeat the query directly against the DNS server it was referred to.

A non-recursive query is a query in which the DNS Resolver already knows the answer. It either immediately returns a DNS record because it already stores it in local cache, or queries a DNS Name Server which is authoritative for the record, meaning it definitely holds the correct IP for that hostname. In both cases, there is no need for additional rounds of queries (like in recursive or iterative queries). Rather, a response is immediately returned to the client.

A Zone file is basically a text file present on the server hosting the domain that contains entries for different resource records. Each line is represented by a different record.

Each zone file must start with a Start of Authority (SOA) record containing an authoritative name server for the domain (for e.g. ns1.google.com for google.com) and an email address of someone responsible for the management of the name server.

Domains can be very large, so they are further organized into smaller books, called, “zones.”  No single DNS server stores all the books – that would be impractical.

Different types of Resource Records exist within a Zone file. However we are going to discuss some of the important ones 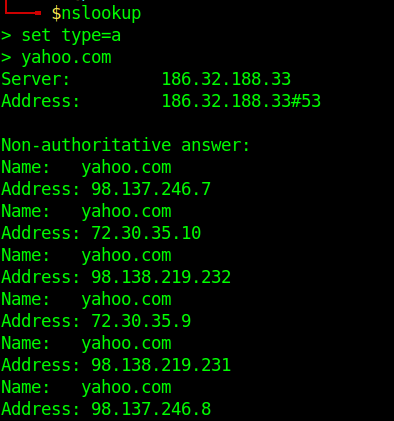 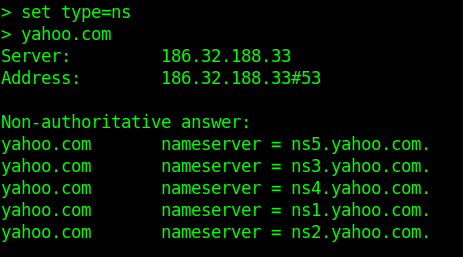 Multithreaded Perl script to enumerate DNS information of a domain and to discover non-contiguous IP blocks. 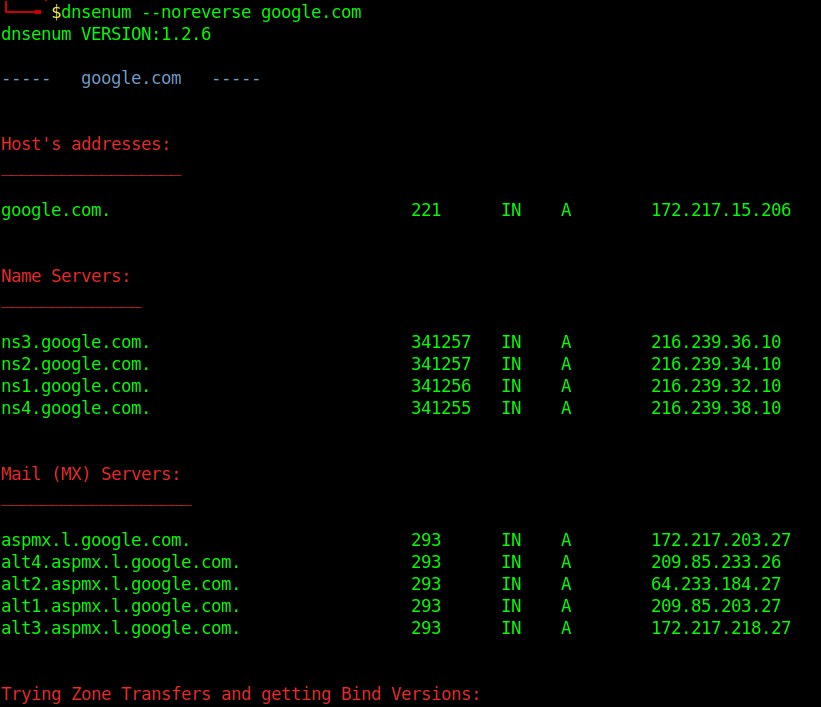 DNSRecon provides the ability to perform: 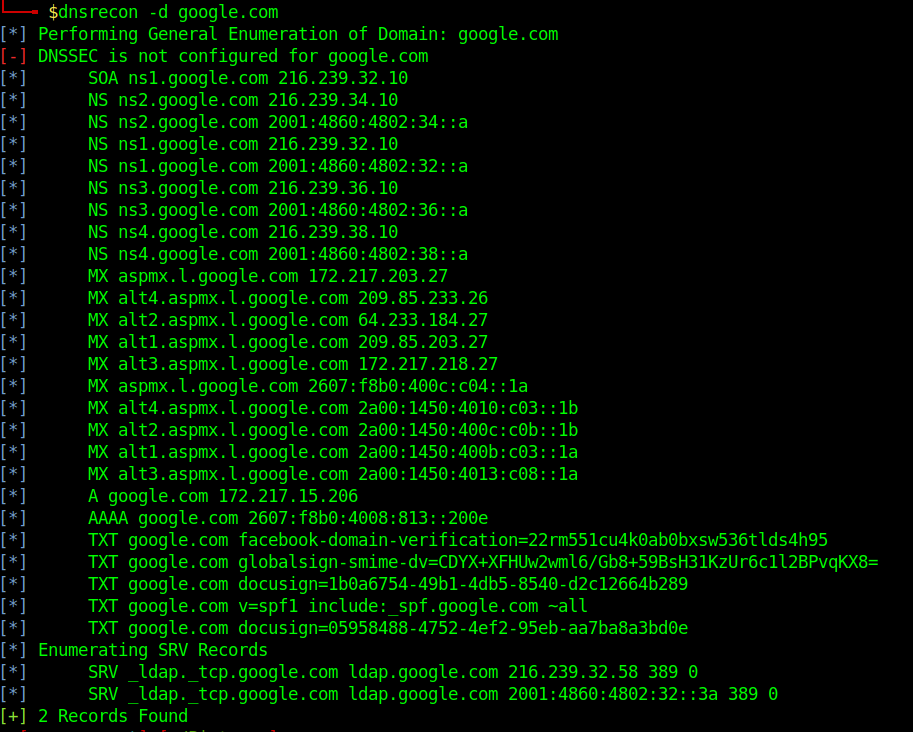 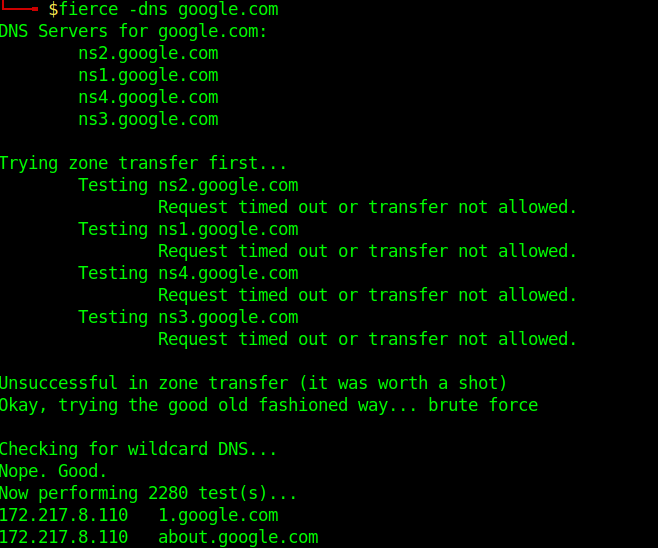 1. Scanning a host with nmap we can sometimes find a domain name, in this case LDAP

2. This server also has DNS (port 53) service opened. We can consult it

3. We now know this server is localhost, so, the FQDN would be localhost.active.htb